The choice of quartz sand:
Generally, as long as the hardness is sufficient, any color, appearance, and particle size of the board can be used (the particle size does not exceed 1/2 of the thickness of the board). High-purity quartz can produce pure color plates, such as pure blackboards, pure whiteboards, etc.

Ordinary quartz sand: less white weathered particles, and a few black and brown particles as possible. Selected quartz sand: spread the sand on a flat surface, with black or other colored particles ≤1 (this requirement can be achieved by manual selection).

Resin: Unsaturated polyester resin, polymer solid content: about 65%, appearance: colorless, light green, light yellow, and transparent, it is best used for artificial stone resin, this kind of resin has small shrinkage and good plate flatness, Will does not deform or crack; in addition, try to choose low-viscosity resin, the amount of this resin is relatively low. 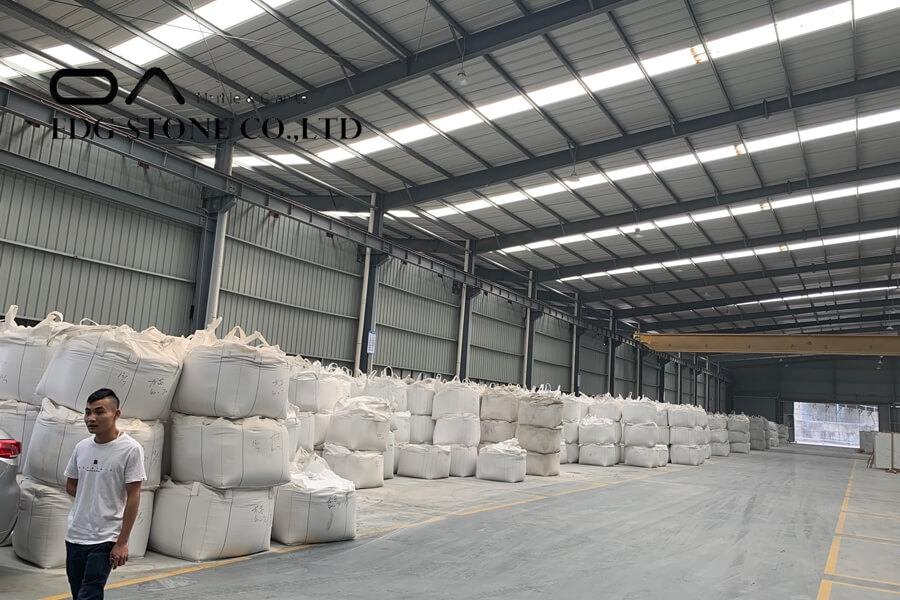 China quartz remnants for sale near me

Pigment: In the process of selecting artificial quartz stone raw materials, in order to ensure the weather resistance of the material, try to choose inorganic pigments. However, organic materials such as carbon black and scarlet with stable weather resistance can also be used. Commonly used colors in the production of quartz stone include R902 white, 4920 yellow, phthalocyanine green, phthalocyanine blue, permanent violet, scarlet powder, permanent red, 4330 black, carbon black, BK03 special black, and so on. In the production of artificial quartz stone, there are two ways to add color materials: one is to add resin to prepare a color paste and then use; the other is to directly add to the sand powder and use after mixing. The latter addition method must ensure the uniformity of the pigment, which requires relatively high equipment.

Curing agent: an indispensable auxiliary for the production of quartz stone. Generally, artificial quartz stone is formed by high-temperature curing. The curing agent is a substance or mixture that promotes or controls the curing reaction of the resin. Resin curing is the process of irreversible change of thermosetting resin through chemical reactions such as condensation, ring closure, addition, or catalysis. The curing is completed by adding curing (crosslinking) agent. Generally use tert-butyl peroxide diethylhexanoate curing agent, the curing agent is generally 0.8%~1.2% of the resin content.

Coupling agent: It can improve the dispersion and adhesion of the filler in the resin, improve the process performance and improve the mechanical, electrical, and weather resistance properties. The commonly used silane coupling agent is KH-570, and KH560 is recommended for plates with high-quality requirements.

(2) Color paste
The mixing time of the color paste and the ratio of resin to pigment will directly affect the color of the board.

(3) Mixing and stirring
In the production process of artificial quartz stone slabs, a single raw material is used after being premixed according to the production order or batch to reduce color difference; when stirring, a planetary high-speed mixer is used to ensure that the raw materials are fully mixed.

(4) Fabric
The cloth is carried out in the cloth device to meet the production requirements. 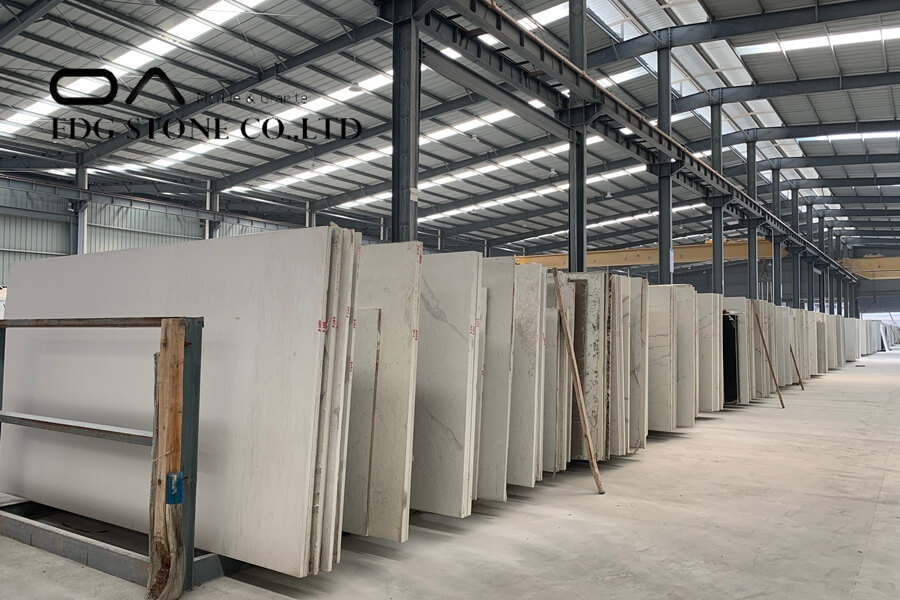 (5) Press pressing
The artificial quartz stone plate is formed under the action of high pressure and strong vibration force in a vacuum state, and the produced artificial quartz stone plate has high density and low water absorption. The pressing time varies depending on the formula and the thickness of the sheet. Generally, it is 2~4 minutes. After the artificial quartz stone sheet is pressed, the paper must be uncovered. It must be ensured that each part is in the same degree of adhesion with the paper/membrane, and no localization can occur. The bulge, when touched with your fingers, the entire surface of the board must have the same softness.

(7) Placement of semi-finished products after curing
For the placement of semi-finished boards, if the resin shrinkage is small, the bottom of the board can be vertically placed on the A-frame; if the resin shrinks greatly, it is recommended to lay the board bottom to the bottom flat, and the surface of the board must be cleaned very clean, In order to ensure the flatness of the plate in the later stage. After curing, the plate must be placed for 24 hours, and the polishing process can be carried out after the plate is completely cooled.

(8) Polishing
The smaller the particle size, the lower the gloss, and the gloss after polishing is generally around 40°. The larger the particle size, especially the plate containing large particles of glass, the higher the gloss and the gloss after polishing is generally around 60°. The choice of polishing surface: Generally, the surface in contact with the template is selected as the polishing surface, because this surface has better flatness and smoothness. During the cloth process, this surface has fewer impurities, and during the curing process, this surface has a high density. Therefore, it is most ideal to choose this side as the polishing surface. Selection of grinding blocks: Use good quality granite stone grinding blocks and a reasonable mesh number. Polishing speed: The polishing speed is different due to the raw material formula and the color of the plate. For example, for small particles and pure color plates, the linear speed should be slowed down during the polishing process; while for large particles and glass particles and light-colored plates, the linear speed can be relatively faster. 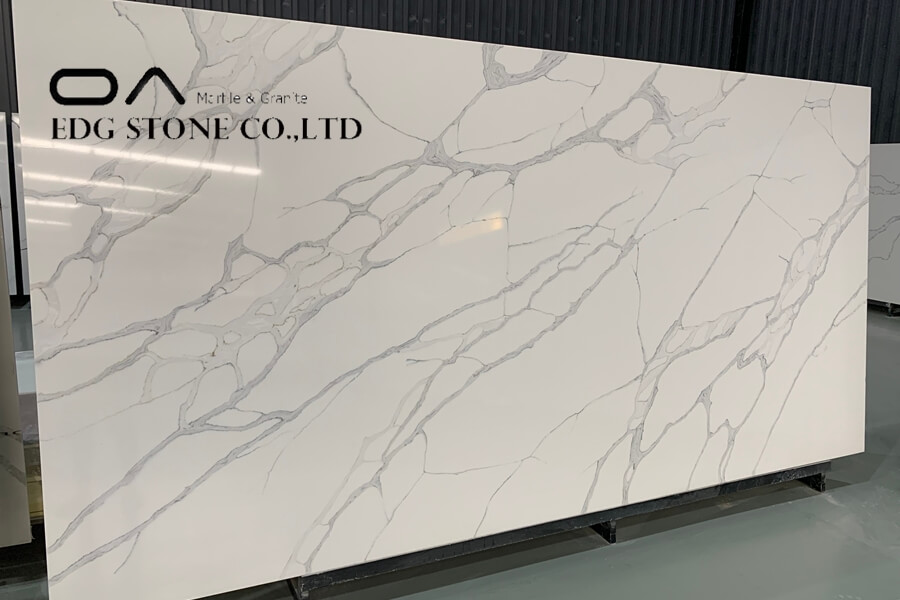 Common problems and solutions in production:
During the production process of quartz stone, due to improper operation control, various defects such as deformation, cracking, fading, discoloration, powder mass, watermark, pinholes, pores, impurities, etc. will occur. How to avoid these defects and reduce the waste of cost, sum up the following experience:

(2) Discoloration: Discoloration is mainly related to the performance of the resin, pigments, and curing agent. The solution is as follows: 1) Use a resin with good stability. 2) The use of a thermal curing agent to ensure that the curing agent can fully react and leave no residue during the heating process. 3) Using inorganic pigments, good weather resistance.

(3) Stomatal holes: There are two types of stomatal holes, one is small pinholes, which are usually caused by the vacuum not reaching -0.1MPa and the resin content in the formula is too high; the other is large irregular holes, usually Because the structure of the formula is unreasonable, the fabric is uneven, and the fabric is not dense when pressed by the press, and the force of the fabric is uneven. The prevention methods are: first, use good vacuum equipment, use special vacuum pump oil and do good maintenance; second, the seal of the press and pipeline should be good, and the vacuum chamber of the press should be small; third, it must be well-designed The formula structure; the fourth is to have good molding equipment and mature production technology and operating procedures.

(4) Watermark: The appearance of the watermark is caused by the uneven distribution of the toner used inside the plate due to local pressure and uneven movement during the pressing process of the plate. However, a press with strong pressure and vibration can prevent this problem well under the control of a mature production process.

(5) Wear scars: Wear scars are the most common problem, especially on dark boards and solid color boards. The use of special grinding blocks can reduce or eliminate such dark marks, and choose a reasonable polishing speed according to the color and particle of the plate.